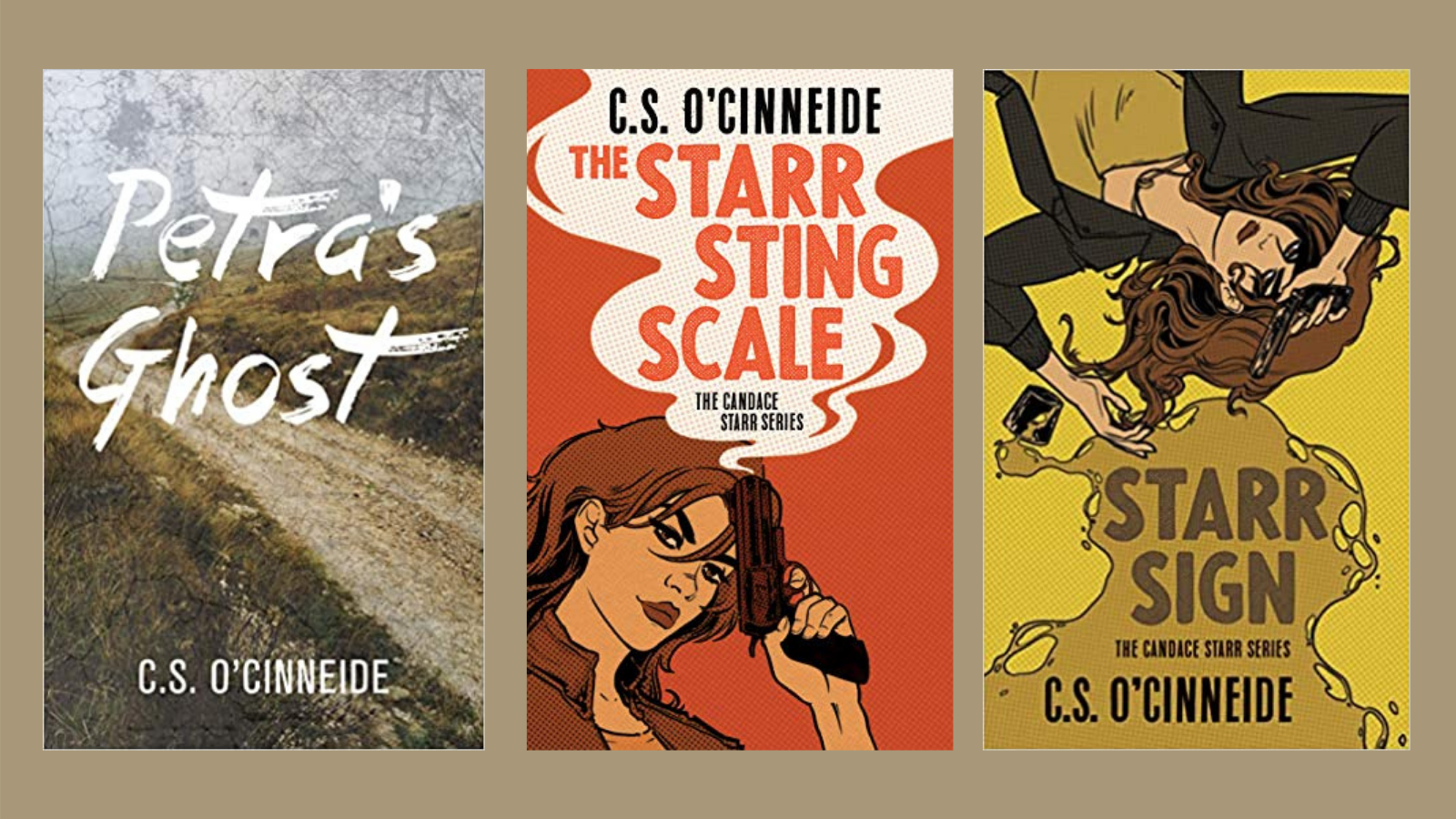 There are a number of new Canadian writers who I’ve had the chance to meet in the past few years as my own debut novel came out. C.S. O’Cinneide is someone who stands out, though, because of the interesting breadth of the writing that she is doing. She’s not willing to be pigeonholed in any one genre, instead focusing on creating really entertaining books. From Petra’s Ghost to the Starr Sting Scale, you never know what you’re going to get, except that it will always keep you turning the pages.

When you first start have a story idea, is its genre already part of that, or does that come later?

I had a writing prof at the University of Guelph who said once that all stories are mysteries. Otherwise, why would you keep reading to find out what happens at the end?

Most of my writing might be classed as mysteries in this way, and since I love a good twist, there will always be a few curve balls as well.  So, the genre of my writing is possibly pre-determined and independent of the “idea.”  That being said, my first novel, Petra’s Ghost, was a modern-day gothic thriller set on the Camino de Santiago —- while my second, The Starr Sting Scale, was laugh-out-loud funny, but firmly in the hardboiled crime fiction category. In both cases, the story idea I had was inextricably linked with the vibe of those particular sub-genres right from the start.

What’s the hardest part of writing for you?

Starting. Every day when I sit down in front of the computer to write it is like diving off a cliff into deep waters.  No matter how many times I’ve made the plunge before and survived, my fear is palpable. Now I get why so many writers drink. Although I stick to tea, as I am not young enough to authentically pull off a tragic lifestyle.

Has the pandemic changed your view on the role of the artists/writers within society?

Books have been my best friends during this pandemic. And I am so thankful for all the talented authors who are feeding my voracious isolation reading habit.  Similarly, I am grateful to the screen writers who pen intelligent content to satisfy my nightly Netflix viewing. Never has the need for escapism been more widespread. And I think we need to appreciate our creative artists and support them with this in mind — particularly, some of the quieter voices out there, who have been harder to hear with the advent of the pandemic. If we don’t start reading and supporting emerging authors and independent filmmakers, we will be left with nothing but the mainstream, which is the creative recipe for boredom.

“Petra’s Ghost” is classified in some places as a horror novel, and in others as a mystery. How did you see it as you wrote it, and has your perception changed after seeing the reaction from readers?

When Dundurn Press decided to publish Petra’s Ghost, they told me they were going to promote it as literary. I remember asking, “But what about the creepy bits?”

It seems those creepy bits got noticed regardless, as months before its release the book was showing up on multiple lists of the Most Anticipated Horror books of 2019.  I’ve since had the book described as literary horror, gothic thriller, psychological suspense, magical realism, and dark mystery, just to name a few. It has made me question the whole concept of genre. Is Dicken’s A Christmas Carol horror because it has a ghost in it? Is The Notebook a romance novel?

From my perspective, I was aiming to write a book that would make your pulse race in places while providing a deep, moving and vivid experience of the Camino pilgrimage through the eyes of a grieving Irishman. Whatever the novel is classified as, I think I’ve done that.

And yes, there are lots of creepy bits.

What spurred you to write “The Starr Sting Scale”?

I’d had an agent reject another novel of mine. She said the writing was strong and the characters wonderfully rich, but it wasn’t commercial enough. I sat down at my laptop, and thought “I’ll show you @$!(*&%%  commercial.”

Out of this creative tantrum was born the six-foot-three former hitwoman, Candace Starr, the protagonist of The Starr Sting Scale. The novel is a modern take on the hard-boiled crime fiction genre, but with a feminine and witty twist. It must have been at least a little bit commercial, because the publisher signed me to a three-book deal (I bypassed the agent). The second in the series, Starr Sign, comes out in March 2021.

What attracts you to noir fiction?

I love the vivid detail that I feel characterizes this genre. Nobody ever just steps out onto a rainy city street in a noir novel.  If you don’t shiver from that icy rain seeping into your jacket collar or taste the urban grit of the sidewalk in your teeth, then it’s not noir. Plus, the down and dirty metaphors are to die for. One of my favourites is from hard core noir writer, Jim Thompson — “Life is a bucket of shit with a barbed wire handle.” I know that’s a bit coarse, as my mother would say, but it is also incredibly evocative. These coarse characters I find easier to understand than squeaky clean ones. Dennis Lehane said that “in Greek tragedy, (characters) fall from great heights. In noir, they fall from the curb.”  That’s something a perfectly- imperfect flawed human being like me can really get behind.

What are the challenges of writing in multiple genres as an author and a writer?

I worry sometimes that people will be shocked by how different some of my books are from one another. I remember one review of Petra’s Ghost, where the reader had read The Starr Sting Scale first, and basically said “Well folks, welcome to the other side of the library!”

But that reader, while surprised, still enjoyed both books. And I don’t think he (or I) are the only ones who appreciate a variety of genres.

In terms of the writing part, it’s nice to switch up styles and voice across books. It helps me from getting stale. And in the end, there always has to be a well-structured plot, no matter what you’re writing, so the rules are the same in that regard for any genre. Poor structure is the number one mistake I see emerging writers make. There are lots of people out there who can write superior prose, but if you don’t have the story structure to hang those words on, what you really end up with is a book of poetry, not a novel.

What advice would you give to other writers or artists?

Wow, I must have had ESP when I got up on my soapbox about structure in the last question. Learn about structure— that’s my advice if you want to write a novel. Whether you are a pantser or a plotter, you’ve got to have it. Plot points, stakes, reversals – these should all be terms that a novelist is familiar with and knows how to use. For a good book in this regard, check out Save the Cat!  Writes a Novel by Jessica Brody. Stupid title, but an awesome resource. Also, Page-Turner: Your Path to Writing a Novel That Publishers Want and Readers Buy, by Barbara Kyle.

Do you see particular challenges that are unique to being a female writer that men might be unaware of?

This is a touchy subject these days. There are many who believe that women no longer face barriers in publishing. But while I think this may be true in some genres and arenas, I don’t think it is true across the board.  Women may be holding their own in the general mystery category for instance, but they are underrepresented in both the thriller and horror genres.

As well, there are those who don’t give as much credence to women’s stories as they do to men’s, no matter who is writing them. Once, I was in a creative writing class discussing an early draft of The Starr Sting Scale. In that book, Candace is teamed with a female cop, Detective Chien-Shiung Malone. A guy in my class asked, “Do you really think people will want to read a crime fiction book about two women?”

All I can say is, he was lucky Candace wasn’t around.

Are you working on a new project?

I’m just reviewing the final proofs for Starr Sign, the second in the Candace Starr series, due out March 2021. In this book, Candace takes on her estranged mafia family with her teenage half-sister and a white hat hacker she picked up at fan conference. In addition to that, I have a domestic thriller in first draft stage, titled Eve’s Rib. It is more in the vein of Petra’s Ghost, psychological suspense with some magical realism thrown in. After I finish that, I need to start on the third and final Starr novel, which I think will tackle Big Pharma. Wow— looking at all that written down is starting to make me sweat a little.

What are you reading now or have read recently that you’d recommend?

I’m reading Tana French’s The Searcher. That woman has a talent for dialogue that surpasses any modern thriller writer I know. And of course, the story is deliciously Irish. Highly recommend it, along with all her books.

BIO. C.S. O’Cinneide (oh-ki-nay-da) is a writer and a blogger on her website, She Kills Lit, where she features women writers of thriller and noir. Her novels include Petra’s Ghost, a semi-finalist for the 2019 Goodreads Choice Awards, and the Candace Starr Crime series. She lives in Guelph, Ontario with her Irish ex-pat husband who remains her constant muse.

One thought on “An Interview with C.S. O’Cinneide”