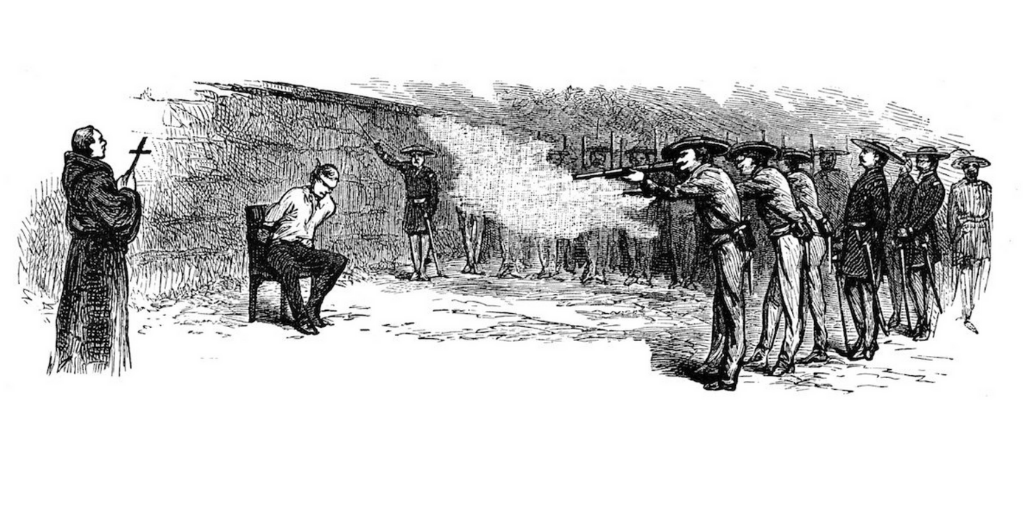 The word “filibuster” case come to mean a political delaying tactic, using long winded speeches to cause a piece of legislation to fail to pass. But the origins of the term are much darker, as is the history of the most famous of the filibusters, William Walker.

The English word comes from the Spanish filibustero, itself a derivation of the Dutch word vrijbuiter, meaning “pirate” (or in the English direct derivation of the Dutch, “freebooter”). First used to describe English privateers such as Sir Francis Drake, the word fell out of customary use before it was revived in the mid-19th century to describe American adventurers, like Walker, whose freelance military schemes sought to add slaveholding territories to the United States, or in the case of the Fenians, to capture Canada as leverage to free Ireland.

The land they targeted to form potential slave states was in Mexico, Cuba, Central America, and Venezuela. As all of these places had functioning governments with militaries to defend themselves, the filibusters had to bring considerable force to bear in order to achieve their aims.

William Walker was born in Nashville, Tennessee and graduated from law school at age 14, and medical school at age 19. He practiced neither profession for long, instead becoming a newspaper editor, first of the New Orleans Crescent and then of the San Francisco Herald. One gets a sense of his disposition by the fact that while in San Francisco he fought three duels over points of honour.

In 1853, Walker first tried his hand at private military action, raising a force of nearly fifty men to seize the town of La Paz in Baja California, which he declared to be the capital of the “Republic of Lower California,” with himself as President. He was quickly forced to retreat in the face of the Mexican Army. Back in the United States he was tried for violating the Neutrality Act of 1794, but despite the fact that he was clearly guilty, a jury took only 8 minutes to acquit him.

The Invasion of Nicaragua

He next attempted an invasion of Nicaragua. With no canal yet built in Panama, and no transcontinental railway either, the quickest way from New York to California involved a trip by boat up the San Juan River into Lake Nicaragua, a 12 mile stage coach ride to the Pacific, and then an onward journey by ship again. This route was controlled by American businessman Cornelius Vanderbilt, one of the richest Americans in history.

A civil war was already ongoing in Nicaragua between the conservative Legitimist Party and their opponents, the Liberal Party. Walker arrived in 1855l eading 60 mercenaries with the sanction of Liberal President, Francisco Castellón. Amongst his men were a number of experienced European mercenaries, as well as future Confederate officers. Bolstered with local recruits, Walker’s men were quite successful and by the following year he had taken control of the country, ruling through a puppet President. Despite the fact that Walker repealed existing Nicaraguan law that banned slavery, his government was given formal recognition by the United States. Walker began a process of Americanization, making English the official language and creating a new administration to run the country.

Walker’s story may have been a success if not for the fact that he refused to recognize Vanderbilt’s business interests in the country, seizing them and awarding them to a rival. This led Vanderbilt to use his considerable resources to entice the Costa Rica government to declare war. Despite Walker’s bold attempt to pre-emptively invade Costa Rica with a mercenary force, the tides began to turn against him. He declared himself President after a sham election, and sought support and immigration from the southern part of the United States. Weakened militarily by defections and a cholera outbreak, he was eventually defeated in 1856 by a combined force of Costa Ricans, Hondurans and El Salvadorans.

Initially escaping capture, Walker surrendered in May, 1857 to the United States Navy and was repatriated to New York City and greeted as a hero. Within months, however, he attempted another expedition which failed when he was captured en route and returned to the United States. A fourth and final expedition, this time to the island of Roatán off the coast of Honduras. He was quickly captured by British authorities, who handed him over to the government of Honduras.

Walker’s legacy was a mixed one, with many in the American South seeing him as a romantic hero, while in the North he was widely regarded as a pirate.

His life has been the inspiration for a number of different creative works. Walker himself wrote his memoirs before his final expedition, titled The War in Nicaragua. Famous Nicaraguan writer Ernesto Cardenal (also a minister in the Sandinista government) wrote an epic poem about that period in the country’s history, Con Walker en Nicaragua.

There have also been two films about his life, the second of which is most interesting. Starring Ed Harris and with a musical score by The Clash’s Joe Strummer, the 1987 surrealist film Walker was filmed in Nicaragua while the war against the Contra’s was ongoing. Cardenal even edited the screenplay, and was a regular visitor on set.

Nicaragua has a fascinating history, which is why I chose it for the setting of my novel “Every Arm Outstretched.” Set in 1978 at the height of the Nicaraguan revolution that led to men like Cardenal taking power, it explores how we determine right and wrong when society itself has become corrupt, the meaning of love, loyalty and friendship, and whether the ends can ever truly justify the means.