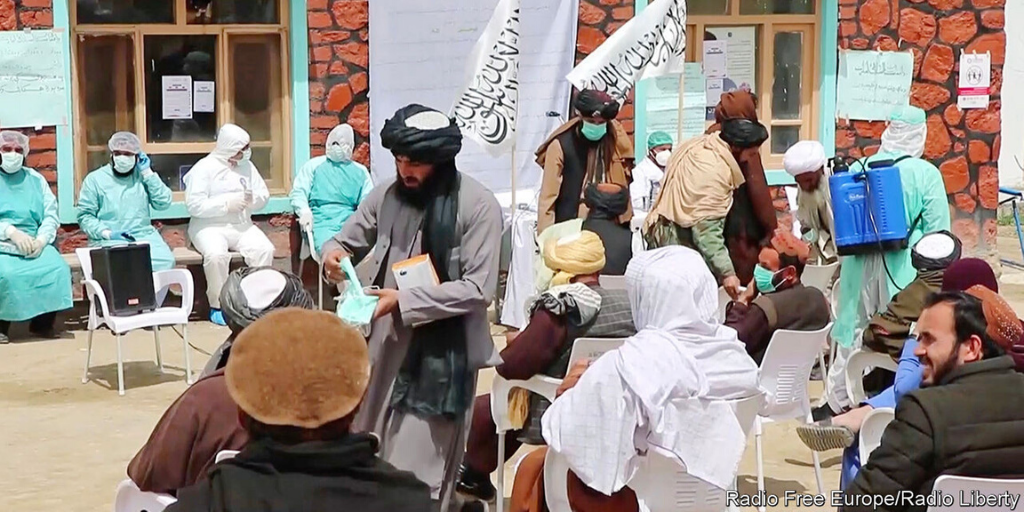 The worldwide COVID-19 pandemic has created new challenges, as well as opportunities, for the Taliban as they vie for power in Afghanistan.

One of the world’s first major outbreaks after China was in Iran, home to a large Afghan diaspora, many of whom fled back into Afghanistan as the crisis in Iran worsened. Predictably, they brought the virus with them leading to a major outbreak in Herat, and then in the capital. As of June, 2020, Afghanistan has only 18,000 confirmed cases and approximately 300 deaths, but these numbers are almost certainly very low due to a lack of testing.

The Afghan government, mired in a political crisis over the presidency, was slow to respond as the crisis unfolded in March, but the Taliban were not.

“Our Mujahideen are helping the health workers to spread out the messages about the dangers of COVID-19…among the public in our controlled areas.”

Afghanistan was to have gone into lockdown, but in many areas this was spottily enforced. Government run schools were closed, and although mosques were ordered to close, many remained open. A huge portion of the Afghan population works in the informal economy and rely on daily wages to survive, and so in many areas the economy stumbled along.

Panic buying of bread and cooking oil lead to shortages and price hikes. An announcement by President Ghani that the government would distribute free bread failed to materialize in many areas due to corruption and incompetence. Government advice to eat fruit rich in vitamin C to counter the virus, aside from being medically suspect, was irrelevant and the cost of imported fruit skyrocketed out of reach of the average family.

A popular perception of the government response to the coronavirus was that they were using the crisis as a pretext to milk the international community for funds that could be stolen. There were rumours of people being paid to report themselves as sick to inflate the statistics, or even to pretend to be dead. While these rumours are likely untrue, endemic corruption does mean that whatever aid is given to Afghanistan to respond to the pandemic, only a small portion of it will ever be used to benefit the population. The distribution of aid is always political, as various parties seek to provide, maintain or grow their influence by directing a portion of it to people within the patronage network.

The Taliban have long sought to establish that they are a more effective administration than the current government, and they are using the pandemic to further this goal. While the Taliban sometimes attack government-run clinics and hospitals, they more commonly co-opt them, directing how and where they are “allowed” to work. This is similar to how they enforce their own rules on government-run schools, monitoring what is taught and even docking the pay of teachers who are absent. In large parts of Afghanistan, the Taliban has shown that its shadow administration is less corrupt, more responsive and better aligns with local (conservative) values than that of the government in Kabul.

The Taliban have long been very effective at setting standards for public conduct and enforcing them, with often brutal methods. They are doing the same in response to the pandemic, spreading direction on how to act through religious sermons. They famously recaptured a coronavirus-positive patient who had escaped quarantine in a hospital in Balkh, returning him to the authorities. They have also spread public health information through a very active social media campaign, counteracting a flood of misinformation about COVID-19 on popular networks such as Facebook and WhatsApp. The video below from 30 March, dubbed in English, is clearly meant to show that the Taliban are proactively managing the pandemic response.

The COVID-19 pandemic has also created a challenge for the Taliban, as persistent rumours suggest that many of their leaders have been infected, including the majority of their negotiating team in Doha. The Taliban leader, Mullah Haibatullah Akhunzada has allegedly died of coronavirus, while his deputy, Sirajuddin Haqqani is seriously ill in a Pakistani military hospital. If this were true, this would leave the founding leader’s son, Mullah Mohammed Yaqoob, as the de facto leader. While the Taliban deny that their leader has died, it is important to note that they have a history of concealing the death of prominent members, including that of the founding leader Mullah Omar, and Sirajuddin’s father Jalaluddin. These deceptions created serious schisms within the organization in the past, and it is unclear whether Mullah Mohammed Yaqoob has the wasta navigate the politics of succession if he were to be seen as being anything less than transparent with the rank and file.

The fact that the Taliban’s negotiating team has been incapacitated while peace talks with the government are ongoing is also of concern, as there needs to be further progress if a long lasting cease fire is to be agreed to. As much as the Taliban have very effectively capitalized on the opportunity to bolster their legitimacy that the COVID-19 pandemic in Afghanistan has provided, its effects might also prevent them from achieving the goal of a political settlement.

For further insight into the philosophy underpinning the Taliban movement, check out my novel “This Shall Be a House of Peace,” or my upcoming history “Blood Washing Blood.”