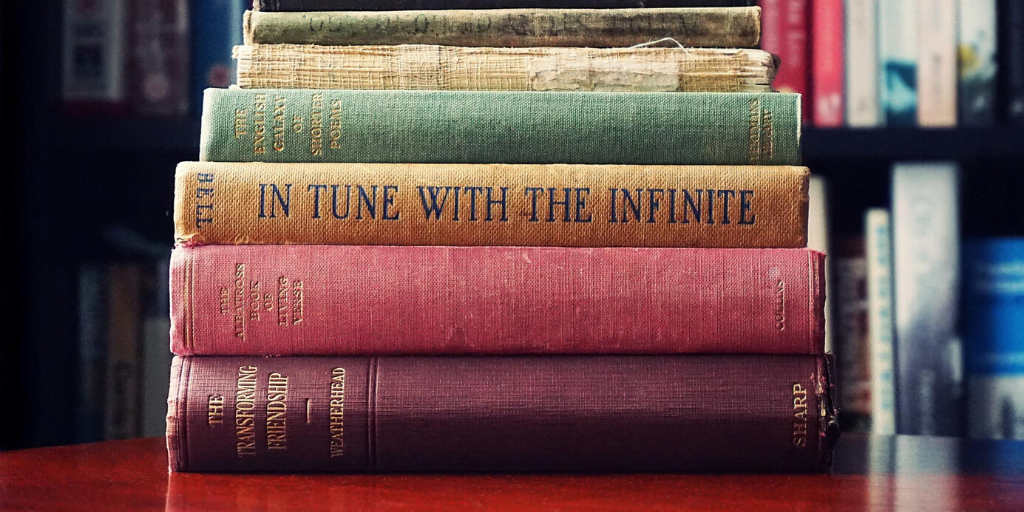 I’ve written before about the concept of tsundoku, and I must admit that I am an avid practitioner. The fact that I have a pile of books waiting to be read is no obstacle to me buying more books. I have a modest collection of about 1500 books that are prominently displayed throughout my house. And if you are anything like me, whenever I’m at a friend’s house, I take a look through their bookshelves to see what they’re reading and what they’ve read.

While you can’t judge a book by its cover, you can certainly judge a person by their book collection.

(not that we should be judging each other…)

And so, in that spirit, I decided to give a bit of a tour of some of the stranger books in my collection, and how I came about having them. This could easily become a very long post, and so I’ll limit myself to only a handful of books.

This three volume set is an ethnographic guide to the tattoos of the Russian criminal and prison underworld, compiled by Danzig Baldaev, a medical attendant working in the prison camp system. Each book is absolutely full of photographs and sketches of tattoos, with short translations of the Russian text and descriptions of the meanings behind them. Tattoos are an important part of the culture of the vor v zakone (“legitimate thieves”), and are a hidden language passed largely by oral tradition. Similar to how a knowledgeable person can “read” a military member’s service from their uniform and medals, a knowledgable criminal can do the same from a set of tattoos. It’s also interesting to know that many of the tattoos depicted in the encyclopedia have a negative meaning, and are tattooed on unwilling recipients.

There was a point in my life where getting a basic handle on the meaning of these tattoos was part of my day-to-day work, but the more I read, the more I recognized the broader ethnographic value of this information. “Under-dog” culture, more often than not, does not get recorded. This encyclopedia set makes sure that this cultural information will not get erased.

There are a lot of different ways to write history, and if done well, the author “connects the dots” between myriad different facts in a way that allows the reader to see things in a new light or gain a new insight. These kinds of social history take a look at the thread that runs through history of particular things, and the ways that they either influenced or were influenced by events. I am a history buff to begin with, but finding new connections between points of data is something that I really enjoy.

Along the same lines is the fantastic book, “A History fo the World in Six Glasses” by Tom Standage (Deputy Editor at The Economist). Recognizing that the division of history into eras delineated by the predominant material of tools (Stone Age, Bronze Age, Iron Age, etc) was arbitrary, he reorganized history into eras by the predominant beverage. Not only is it a lot of fun, it’ll change how you think about history.

Tourist Guides for Iraq and Afghanistan

I’ve done a lot of travel, including to some very out-of-the-way places for work and for pleasure. Two travel books that you won’t often see on anyone’s shelves are tourist guides to Afghanistan and Iraq. I bought both books while working in those countries, and both were a revelation.

Afghanistan is synonymous with conflict after four decades of war, but in the 1960s and early 1970s, it was a very popular hippy travel destination. It was possible at that time to drive from anywhere in Europe along the old Silk Road to India or China, and just as it did a millennia ago, Afghanistan sits at the centre of that route. Nancy Hatch Dupree wrote a travel guide in 1970 that went through at least seven re-printings. I bought my copy in a dusty bookshop on “Chicken Street” in Kabul. Afghanistan is filled with sites of great cultural interest, and using her book, I was able to find many of them even with the war going on around me. It was incredibly sad to see just how far removed the present day reality was from the past shown in the book, but at the same time, it gave me a different perspective on the country and its potential future.

Similarly, the Bradt travel guide to Iraq captures a snap shot of the country before it disintegrated into violence. Released just before the 2nd Iraq War, it’s a poignant reminder of just how fragile modern civilization actually is. Iraq was literally filled with museums and historic sites of massive significance to world culture. While some of these remain, many were destroyed during the insurgency that began following the 2003 invasion, or more recently by ISIS.

I’ll give some more examples from my esoteric book collection in future posts. But now I’m wondering: what are the weirdest books on your shelves? I’d love to hear about them (and maybe where I can get a copy too!)

One thought on “A Tour of my Bookshelves”