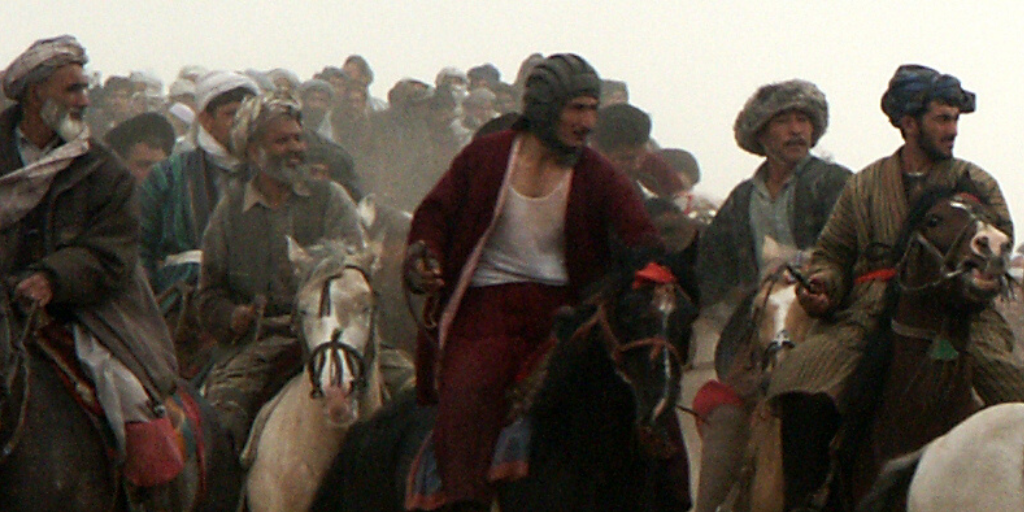 [Originally published as “When the shooting started” in Blood & Bourbon.]

When the shooting started, the first thought to race across my mind was, “This’ll make a hell of an obituary.”  It was crowded out by the more urgent thought, “You’re going to have to live if you want to write your own obituary.”  There is nothing like a near miss by a volley of small arms fire to focus the mind.

“All the important men play buzkashi,” my Afghan friends had told me.  My rudimentary Dari vocabulary gave me the essence of the game.  A buz is a goat.  And kashi means “to grab.”  Goat-grabbing is the Afghan national sport – not that they have a nation, per se.

I wanted to show my Western go-getter attitude, and so I asked the question that I thought cut right to the heart of the matter.  “How do you win?”  My friends laughed and explained that all you had to do was pick up the headless goat carcass that was the playing piece, bring it around a pole and drop it back where it was originally found.  That act scored one point, and one point scored a victory.  I nodded, and said quickly, “I could totally play that.”  It was only then that they explained that there were a few – they talked amongst themselves in Dari to find the right word – complications.

The details came spilling out of them as they talked over each other.  As many as several hundred people played the game at once.  There were no teams.  Everyone was mounted on horseback.  The pole could be several miles from the starting point.  The game was played full contact, and the players carried short whips and sometimes guns.  The players were almost all irregular soldiers of the various militia factions who held sway across the north of the country. The prize for the winner was substantial – cash, gold or even new cars, freshly smuggled from Dubai via Pakistan.  It was not uncommon for spectators to get trampled.  It was poor form to deliberately kill an opponent – but, of course, for a new car…

And so I borrowed a horse, and before I knew it, I was in a whooping swirl of horsemen jockeying for position over the corpse of a goat in a scene that surely would have been familiar to any of Genghis Khan’s horsemen, less of course for the SUVs ringing the playing field and the kalashnikovs slung over the backs of many of the players.

Over the entire season of matches, I must admit that I never touched the goat.  Like many of the other players, I was there to see and be seen, to participate in the scrum in such a way that I maximized my projection of power and potential for gain while minimizing my risk.  The crash of horsemen rolled back and forth like a wave across the field as alliances of convenience were formed and collapsed and men jockeyed constantly for better position, even if only by the smallest degree.  It was 21st century Afghan politics staged for the public and clad in the guise of 13th century warfare.  Or was the jockeying of ministers and warlords in Kabul and the provincial capitals actually 13th century politics clad in the guise of 21st century warfare?

More gunfire focused my mind.  One rider had the goat lying prostrate across the front of his saddle and was firing his Kalashnikov over his shoulder, one handed, at a full gallop.  Horsemen scattered from behind him, veering out of the way of the wild spray of bullets and trying to overtake him from the side.  More firing began as spectators shot their guns in the air, and soon the sports field sounded like a pitched battle was taking place, the sound of gunshots rippling across the crowds, seemingly from horizon to horizon.

My first instinct was not to duck and ride away, but hearing the shouts of my friends, instead I turned my horse to the sound of the guns and raced after the goat.  Together with them I charged across the grass to that point on the dusty field where life was being lived in ways that transcended time and place, where life was reduced to a simple struggle for survival, as epitomized by the desire to grab the goat and hold on against all others.